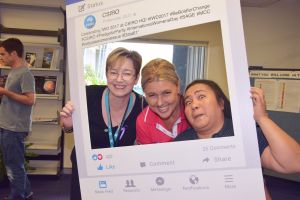 The 2017 edition of IWD at CSIRO received widespread support from a range of organisations and Chief Executive Larry Marshall marked the event with a video message to all staff.

Canberra marked IWD with a lunchtime forum featuring Anna-Maria Arabia, Chief Executive Officer of the Australian Academy of Science. Anna-Maria has held roles at Science & Technology Australia as Chief Executive Officer; Questacon as General Manager; and most recently as Director of Policy and Principal Adviser to the Federal Leader of the Opposition, Bill Shorten MP.

The Staff Association co-hosted a morning tea at Data61’s Eveleigh worksite. The event included a brief group workshop on how Data 61 can work towards the goal of more inclusive and gender-equal workplace.