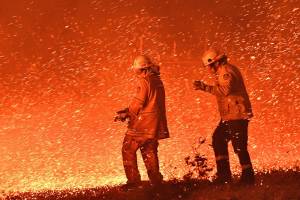 A CSIRO document explaining the recent bushfire season has come under scrutiny in Senate Estimates; with revelations of controversial changes made during the drafting process leading to questions over possible government interference being levelled at senior executives.

Meanwhile, efforts to deflect criticism of the Federal Government’s handling of the bushfire crisis have been undermined by separate testimony revealing that funding for the Bushfire and Natural Hazards Cooperative Research Centre (CRC) would cease in little over a year.

At a research roundtable convened by the Government in January at the height of the crisis, CSIRO was commissioned by Science Minister Karen Andrews to produce a factual document designed to improve understanding of contributing factors to bushfires.

An early draft of the document, tabled at Senate Estimates, revealed several key changes when compared to the finished document. New South Wales Labor Senator Jenny McAllister outlined four sections of the draft explainer that were deleted from the final copy.

The following statements were deleted:

Questions on the role of the Minister Andrews’s office in the controversial edits led to a combative exchange between Senator McAllister, CSIRO Chief Executive Dr Larry Marshall and Executive Director Dr Peter Mayfield.

“Did the minister have any input into the review or the production of this document? I’m trying to understand the provenance of the changes to the document… I’m waiting to find out whether or not the minister’s office was involved in reviewing this document,” Senator McAllister said.

“I believe there would have been some suggestions, yes… there were suggestions made by all participants. Yes.”

Dr Marshall struck a defiant tone in reply to the scrutiny.

“Senator, we said at the beginning of our testimony that all participants at the roundtable contributed to the document. But it’s a CSIRO document, it carries the CSIRO brand, it goes through the CSIRO process and CSIRO held the pen. It’s a CSIRO document. We wrote it for the purpose of explaining to the public – because let’s face it, you can’t understand what’s going on with bushfires by reading the media.

“We wanted to give a simple explainer for the public about the causes behind the fires and the actions we were taking. It’s really that simple.”

Earlier, Victorian Labor Senator Kim Carr zeroed in on the funding arrangements for the Bushfire and Hazards Natural Hazards CRC.

In answer to questions concerning the future of the research, David Wilson from the Department of Industry Science and Resources admitted funding for the CRC would cease next year.

“The Bushfire and Natural Hazards CRC completes its funding term under the program on 30 June 2021. The department has been engaging with the CRC in relation to, as with all CRCs, their transition plan for the conclusion of their CRC funding. The government is actively considering what would be future collaborative research arrangements in relation to bushfire and natural hazard planning and research.”

Recent Federal Government changes to the CRC program included set time limits for CRC funding with no possibility for extension in any circumstances, including via a so-called public good mechanism.

“The bushfire CRC would be universally regarded as a highly effective organisation involving a very large number of our emergency services, all emergency services agencies from across Australia; every major university involved in research into bushfires; Commonwealth and state departments; and international collaborators such as New Zealand, Portugal and the United States,” Senator Carr said.

“The CRC has funding until mid-2021 and the government is considering future funding through the normal budget process,” Employment Minister Michaelia Cash said in the wake of the testimony.

“The government is actively engaging with the Bushfire and Natural Hazards CRC on future funding arrangements, including a meeting in February between the Prime Minister and Minister Andrews with the chair and research director of the CRC,” Minister Cash said.