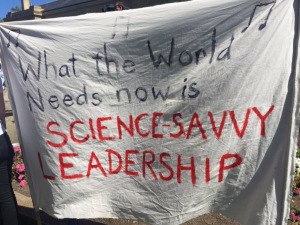 Community protest against proposed CSIRO cuts continue to grow with hundreds of people rallying in Hobart to coincide with public hearings of a Senate committee scrutinising the controversial plan to slash science jobs.

Supporters of CSIRO rallied in Hobart on Tuesday to pressure CSIRO Chief Executive Dr Larry Marshall to abandon his short-sighted strategy to slash research capability in the areas of Ocean and Atmosphere, Land and Water, Minerals and Resources, Digital Productivity and Manufacturing.

The demonstration was organised by the Community and Public Sector Union (CPSU) following a protest outside the Australian Parliament in Canberra a week earlier. More action is planned in Melbourne with an event outside the State Library at noon on Saturday, 2 April.

“These cuts to climate science have prompted global condemnation, sending Larry Marshall and the Turnbull Government a very clear message that they must be reversed immediately,” CPSU Tasmanian Regional Secretary Jessica Munday said.

“This attack on the CSIRO will have a devastating impact on critical climate research, with Tasmania’s science community likely to be hit hard by these cuts. That’s why around 3,000 scientists from around the world have signed a petition supporting CSIRO staff, and concern about the loss of climate science expertise has even made it to the front page of the New York Times.”

The Hobart rally was presented with an open letter of support signed by over a hundred scientists in town for attending the International Partnerships in Ice Core Sciences.

Signatories expressed “their deep concern over the planned cuts to fundamental climate science” at CSIRO.

“Mitigation of the impacts of climate change is something that all countries need to invest in, but this investment must be underpinned by strong understanding of how, and how quickly climate and environmental changes will happened in different parts of the world,” the letter reads.

Meanwhile the Senate Select Committee into the Scrutiny of Budget Measures continues to examine the proposed CSIRO cuts with a focus on the impact of climate science.

Appearing in a personal capacity, CSIRO scientist and Staff Association member Dr John Church described the immediate impact of the proposed cuts to the organisation’s standing in international climate research.

“Our reputation is now trashed, internationally,” Dr Church said and said CSIRO would struggle to attract and retain talented researchers.

“It would require a very significant new investment to convince leading international people to come to Australia.”

Dr Church also expressed concerns about the future of CSIRO’s capacity to perform research in the public good.

““I have grave doubts about the future of public good research in CSIRO in the current funding arrangements,” Dr Church said.