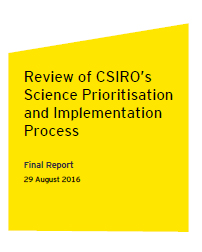 CSIRO has spent hundreds of thousands of dollars for a consultant’s report into the controversial restructure, exposing an extensive list of errors, shortcomings and miscalculations among the organisation’s senior executives and management.

The review – commissioned by Chief Executive Larry Marshall after months of widespread criticism following CSIRO’s plan to cut hundreds of research positions – was conducted by Ernst & Young at a cost of $340,000; according to a Freedom of Information request received by Fairfax Media.

Despite the expensive price tag, the review was relatively narrow in scope. Both the ultimate restructure decision and associated documents remained off-limits to the consultants; who were instead asked to focus on processes and “management of the response to the concerns that were raised both within and outside the organisation about aspects of that announcement.”

Instead the Ernst & Young investigators relied on interviews with senior executives, a range of publically available documents and reports, a couple of staff focus groups and only 53 employee responses from the entire CSIRO workforce.

The report made 14 recommendations across a range of subject topics including governance, process, risk management, change management, external stakeholder engagement, culture and crisis management. In an email to CSIRO staff releasing the report, a chastened Dr Marshall accepted the results.

“While some of the findings of the report are uncomfortable to read, I accept them and the recommendations made, and commit to improve our processes to deliver better outcomes for our staff moving forward.

However the litany of problems and shortcomings the Ernst & Young report attributes to the most senior levels of management is deeply concerning, especially given the Executive Team’s aspiration to transform the nation’s premier scientific research organisation into ‘Australia’s Innovation Catalyst.’

The report also reaches some controversial conclusions when it comes to leadership at the Business Unit level.

Despite admitting that “assessments by the (Business Unit leaders) about risks associated with Business Unit objectives and were not subsequently collated or considered by Executive Team as possible risks to CSIRO,” the report also claims that some unit leaders “lacked clear understanding and messaging to explain the business drivers for change.”

In regard to staff consultation, the report states that “for the majority of staff, the first they heard of the preliminary decision by (the) Executive Team was either through… media reports… (or the) all staff email released on 4 February 2016.”

Dr Marshall’s lengthy and confusing email was found by Ernst and Young to “not translate into staff understanding the rationale for decisions and the drivers for change.”

The confusion seemed to spread. “Subsequent communications… to CSIRO staff from the Executive Team and Business Unit Leaders were reported to, at times; contain ambiguous language and messaging resulting in different perceptions of the changes.”

Noting that since the announcement, CSIRO had suffered high levels of “public scrutiny by the Parliament, media, and both domestic and international science communities,” the report’s authors suggest that historically the organisation requires “significant consultation in order to build buy in and consensus and “win decisions” among its workforce.”

In a back to the future moment, the reports suggests that senior leaders might consider issuing “guidance on strategic change” ahead of decisions “to provide the organisation with early signals regarding directions the Executive Team was intending to take.”

Somewhat surprisingly – despite the obvious failures in communication to staff and consultation – the Ernst and Young report also focussed on the actions of some employees who felt compelled to speak out publically in criticism of the whole debacle.

Under the section titled culture, the report notes the “apparent disregard of the internal CSIRO code of conduct and public comments policy by some staff, further amplified the issues that emerged during the process… this significantly hampered CSIRO’s ability to engage internally.”

Senior CSIRO Executives – the main source of interviews for the report – appear aggrieved that some CSIRO staff made their views known in public.

“Many of those who were consulted or made submissions to this review expressed that the attempted manipulation of decisions and application of external pressure to decision makers’ via media is not considered appropriate; it is a misrepresentation of CSIRO values and culture as a whole.”

Not out of the woods

However the report admits that “as a large public organisation, it is reasonable and appropriate that the operational and leadership performance of CSIRO is publicly scrutinised and held to account.”

That scrutiny is set to continue. Both Labor and the Greens have maintained their call – suggested by the Staff Association – for an external, independent review into CSIRO’s senior management structure and processes.

The Executive Team will face Senate Estimates in Canberra in mid-October and the elements of the restructure process – including the use of private email to discuss job cuts – has been referred to the Commonwealth Auditor General for investigation.

The Staff Association is undertaking a full analysis of the implications of the Ernst and Young report for staff; including a formal, written response to all 14 recommendations.

What do you think about the report? Are you worried about the criticism of staff speaking out?