A senior researcher to be sacked from the CSIRO’s new Oceans and Atmosphere unit considers it retaliation for his role as an outspoken critic of changes in the agency’s focus, writes Cheryl Jones. 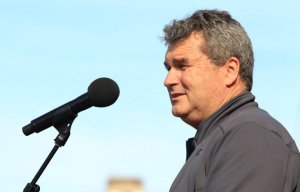 WHEN senior CSIRO research scientist and union official Michael Borgas was handed a redundancy notice a few months ago, he wasn’t surprised.

Borgas, who has a PhD in applied mathematics from Cambridge University, is president of the CSIRO staff association, part of the powerful Community and Public Sector Union.

He was a leader in the campaign of opposition to CSIRO’s moves earlier this year to shift its focus from pure research fields such as climate modelling and monitoring to climate change adaptation.

“It wasn’t a surprise, because I had been led to believe this might happen, against the wishes of the scientists,” Borgas says of the redundancy notice.

“It was a decision pushed by higher executives,” he tells The Saturday Paper. “Other colleagues were shocked and outraged. I was just determined to see it through, knowing I had the support of colleagues, and that the decision wasn’t very soundly based.

“Because of the role I’ve played in advocating for science, I believe I’ve been a nuisance to management, and they were seeking to reduce that influence. I’ve been an outspoken advocate for science in the press.”

The union will not rule out industrial action in support of Borgas if CSIRO fails to redeploy him.

Borgas’s expertise is in a second area of strength in CSIRO Oceans and Atmosphere – air pollution other than greenhouse gases. He specialises in the mathematical modelling of bushfire smoke emissions, industrial effluent and smog.

The work embodies research capacity that could not be replaced by other organisations, Borgas says.

“Universities and consultants cannot replace the CSIRO research capacity, with industry too focused on short-term problems and universities unable to work with complex practical scenarios,” he says.

“My own work dwells more on the science end of the spectrum, with expertise in the complex pathways along which material is blown by the wind.”

The CSIRO has just over 5000 professional and support staff across Australia. The Abbott government cut appropriation funding deeply, leading to job losses of more than 20 per cent, the union says. Despite high hopes with the ascension of Turnbull, CSIRO is forecast to shed hundreds more positions by the end of 2016, the union adds. The agency is now negotiating with the union on which staff will be affected.

CSIRO staff association secretary Sam Popovski says the union will continue to put pressure on CSIRO to give “legitimate reasons why Michael’s work is no longer required by the organisation”.

“It’s a ridiculous decision, in our view, to move out of air-quality work in CSIRO,” he tells The Saturday Paper.

CSIRO undertakes “public good” research as well as research with direct commercial potential. But even if the publish-or-perish imperative has been replaced by a patent-or-perish one in senior management, targeting Borgas seems odd.

“The whole scientific area of air pollution and air quality is profound in our country, but it’s also something the world, more broadly, is needing to deal with,” Popovski says.

“Understanding particulates, understanding their movements and their influence on cities and in regional areas – this work is in high demand around the world. If CSIRO actually wants to partner with countries like China and India, it’s illogical that they would be moving out of an area like air quality.

“We know for sure that there are government and non-government organisations in those countries that are very interested in tackling air pollution. We are shell-shocked that CSIRO has not seen fit to continue his employment in the organisation as a whole. It doesn’t make sense.”

Under its enterprise bargaining agreement with the union, CSIRO is compelled to attempt to redeploy any staff identified for redundancy.

Borgas’s mathematical modelling expertise is flexible but CSIRO has not offered to redeploy him to the Hobart-based CSIRO Climate Science Centre, the establishment of which was announced in April. The centre is expected to focus on climate modelling and projections, but CSIRO declined to answer questions on the number of staff it would hire there, and at what salary levels.

Nor has the organisation offered to redeploy the union official to its Land and Water section.

Popovski says the union will consider legal action if the mathematician is forced out.

“Right now, we’re still hoping he will be redeployed, so we haven’t gone down that track, but we will be prepared to do that if his redundancy is confirmed,” Popovski says.

He says the union will also consider recommending industrial action or a political campaign to staff.

“We will be talking to Michael’s colleagues around what I imagine is going to be the immense amount of support they will wish to demonstrate for him.”

Opposition science spokesman Senator Kim Carr says: “It is alarming that a scientist of Michael Borgas’s standing, experience and knowledge could find himself in the firing line. In the absence of any rationale for shedding such expertise, it is extraordinary that the president of a union can be marked out in this way.

“Labor stands ready to work with the Liberals to craft a long-term, bipartisan approach that builds genuine support for science, research and innovation, but the government will need to be serious this time.”

A struggle of Darwinian proportions within CSIRO started early in February with a long email to staff from chief executive Larry Marshall.

Marshall has a PhD in physics from Macquarie University, in Sydney, and, according to CSIRO, more than two decades’ experience as an “international technology entrepreneur”. He took up the top job at CSIRO in January 2015, and his term ends halfway through 2020.

His email meandered through topics ranging from work to create “a multibillion-dollar industry” for 3D printing to digital disruption before reaching its headline conclusion: the claim that the question of whether global climate change was happening had been settled. Marshall wrote: “… the new question is what do we do about it, and how can we find solutions for the climate we will be living with?”

A maelstrom hit. Borgas played a key role in the campaign of opposition, testifying at the Fair Work Commission, and speaking at big public rallies in Melbourne and Sydney.

The dispute made headlines around the world, including in The New York Times. And thousands of scientists from organisations including the Lawrence Livermore National Laboratory, in the United States, and the Max Planck Institute, in Germany, signed an open letter to federal politicians and the CSIRO board challenging the assertion that the questions of climate change and global warming had been fully settled.

The letter said CSIRO’s climate monitoring and modelling work in the southern hemisphere were critical to the global research effort.

“Australia is a canary in the climate change coalmine, spanning a large range of different climate zones, from the northern tropics to the cool, temperate south,” it said.

“Without committing to the continued development of next-generation climate monitoring and climate modelling, billions of public investment dollars for long-term infrastructure will be based on guesswork rather than on strategic and informed science-driven policy.”

CSIRO was forced to retreat, and spread the staff cuts more evenly across the organisation.

Borgas, meanwhile, is hopeful but not optimistic that he will be redeployed.