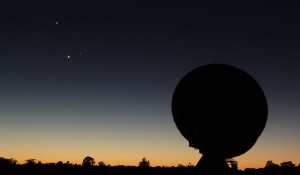 The Staff Association has called for the creation of a special task force to review CSIRO’s anti-bullying and harassment procedures following media reports of serious allegations – including sexual assault – in the Astronomy and Space Science unit.

A recent ABC investigation into bullying and harassment at CSIRO Astronomy and Space Science (CASS) reported 16 claims of misconduct in the unit since 2007 including three allegations of sexual harassment.

Staff Association Secretary Sam Popovski called on CSIRO Chief Executive Larry Marshall to adopt a zero tolerance approach, noting that it had been several years since the Pearce Investigation into workplace bullying at CSIRO and that it was time to review the implementation of the recommendations.

“Every day, every CSIRO officer should go home safe to their family and friends. They shouldn’t suffer harm of any kind or be bullied or discriminated,” Mr Popovski said.

“It has been a few years now since the Pearce investigation was conducted and an appropriate time to review the implementation of actions in response to the investigation and to refocus and communicate to staff on mechanisms to support well being and eliminate bullying and harassment.”

“Clearly, there is also a need to identify gaps and opportunities for further improvement. As one action, we propose the creation of a small task force group – including Staff Association representation – be set up to undertake these review activities and report back to staff in coming months,” Mr Popovski said.

“The story reported on allegations of misconduct in CASS and raised examples of bullying, sexual harassment, and sexual assault. I want to reiterate that none of these incidents is acceptable,” CASS Director Douglas Bock wrote in an email to Astronomical Society of Australia members.

“I acknowledge the pain these incidents have caused individuals, and the impact on their careers, and I am sincerely sorry that this has occurred,” Dr Bock said.

“Let me be clear that just one case of unreasonable behaviour is one case too many,” said CSIRO Executive Director Dr David Williams.

“I want to commend the people who came forward and used our process to raise issues – I recognise that it may have been very difficult for them to do so,” Dr Williams said.

Culture of cover up?

In the report for ABC’s Background Briefing, senior astronomers – including former CASS staff – accused CSIRO of failing to address a culture of bullying and sexual harassment in its astronomy department.

“The secrecy that’s put on around this only ever helps the perpetrators. If things are not right, we all have the responsibility to speak up and say they need to be fixed and yet we can’t speak up,” Dr McClure-Griffiths said.