Thodey describes CSIRO as a ‘work in progress’

Thodey describes CSIRO as a ‘work in progress’ 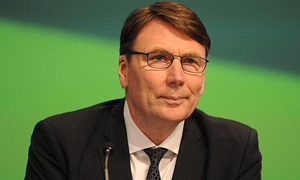 A LITTLE OVER a year after CSIRO unveiled its controversial plans to restructure, its chairman David Thodey said that the moves are “kicking some goals” but cautioned that the overhaul remains a work in progress.

“After 15 months in the job, it’s all settling down a bit. Larry Marshall is a good and enthusiastic scientist, and now he and the CSIRO scientists are getting to know each other better.”

The appointment of Mr Marshall, a long time Silicon Valley venture capitalist and entrepreneur was controversial, and his early tenure was fraught with internal dissent culminating with the elimination of hundreds of jobs as a key part of his plan to restructure the organisation.

“He has been a change agent, and now he is getting on with it,” Mr Thodey said. “What we are working on now is how to make CSIRO more of a catalyst, as well as future science programs and how technologies can create a better work environment.”

Mr Thodey said that a clear part of CSIRO future is better connections with other scientists offshore.

The group is opening an office in Silicon Valley and has collaboration with giant US agricultural group Cargill, as well as aircraft manufacturer Boeing.

As well, it has developed relationship with scientific organisations in Asia including the Chinese Academy of Sciences and Singapore’s ASTAR – the acronym for the city-state’s Agency for Science, Technology and Research, the leading public sector scientific research organization.

But in a wide-ranging interview with InnovationAus.com, the former Telstra chief executive has batted away speculation that he is in running for the soon-to-be vacant chair of the Australia Broadcasting Corporation – principally because it would mean stepping down from the role at CSIRO after only 18 months into his tenure.

This is despite previously expressing an interest in the ABC job and continuing media speculation.

“I am not a candidate,” Mr Thodey.

As well as his position at CSIRO, Mr Thodey is the chief advisor to Squarepeg, the technology-focused venture capital fund created by Seek founder Paul Basset.
He is also chairman of Jobs NSW.

Mr Thodey’s focus on the long term at CSIRO reflects the same thinking that he executed at Telstra, when he took charge of company following the tumultuous four years when the aggressive, divisive American import Sol Trujillo was in charge.

Mr Thodey deflected criticism during his early years at Telstra as its share price remained stubbornly low, and was vindicated when he eventually doubled the company’s market value, in the process restoring its image with customers and the government.

One his early wins at CSIRO was to help to convince the Coalition government to hand back more funds for climate scientists, and the organization responded with a plan to open Climate Change Centre in Hobart.

“It’s moving ahead well and we will open the office in the next few months,” he said.

The centre would specialise, amongst other things, in the ocean and water aspects of climate change, appropriate for a dry continent surrounded by the ocean.

To that end the organisation convened the Future Grid Forum in December last year brining together more than 120 representatives of the electricity industry, government and community “to inform and inspire a national conversation and provide a way forward for the sector, its stakeholders and, most importantly, all Australians.”

As a former resident of New Zealand, Mr Thodey has long had an interest in Australia’s closest neighbor and is chairman of the Trans-Tasman Business Council. As such he is excited about the implications for the tech sector of the recent signing of a Science, Research and Innovation Cooperation Agreement between the two nations.

“It’s only a memorandum of understanding, so it at the early stages,” Mr Thodey said.

Still, there are some obvious areas that can be the focus of collaboration led by biohealth security, animal health laboratories, agriculture technology and general health technologies.

Despite his many commitments, he also not ruled out taking seats on the boards of listed companies including those quoted on Asian stock exchanges, a strategy pursued by another former Telstra chief Ziggy Switkowski, who retains a series of directorships, as well as his role as chairman of the government-owned broadband network NBN Co.

“It’s really just a matter of seeing what comes along, I have had some interest from Asian companies, but they were not the right fit,” Mr Thodey said.

As for his long term thinking for CSIRO and his typically unflustered reaction to the controversy that roiled around the organisation for a good part of last year – perhaps his government masters could take note.

This article was first published by InnovationAus.com, for more information click here.