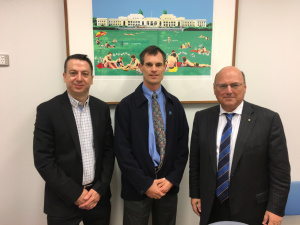 The meeting occurred the week following Minister Sinodinos’ address to the National Press Club and the release of the Government’s National Science Statement.

Meeting with the Minister

Discussions specific to CSIRO featured current and future infrastructure challenges (including AAHL and the RV Investigator), the need to achieve a fair enterprise agreement, concerns regarding leadership vacancies in CSIRO’s environmental science units and the growing problem of attracting and retaining staff due to competition from the universities and the private sector.

Minister Sinodinos reiterated comments made during his press club address the week before – regarding the need for Australia to continue both basic and applied research – and committed to continue the dialogue with the Staff Association into the future.

As part of the Science meets Parliament event, Minister Sinodinos addressed the National Press Club (NPC) in his most significant speech since his appointment to the portfolio in late January, replacing Greg Hunt MP.

The Minister threw down the gauntlet to politicians and commentators that show outright disrespect for scientific integrity.

“There has emerged a lack of respect for the scientific method in some quarters. We see the conclusions of experts being cast aside, in favour of ideological positions and selective use of facts.

“Denying the threat of climate change is a well-worn example; however, rejecting vaccinations – at the risk of children’s lives and public health – resurfaced just this month.

“The only credible response to these positions is scientific fact. And more research, and more innovative thinking,” Minster Sinodinos said.

Minister Sinodinos used the NPC address to announce the launch of the Government’s National Science Statement.

According to the document “the National Science Statement sets a long term approach to science, providing guidance for government investment and decision making and clarity on strategic aims.”

Four broad objectives are identified. These are “engaging all Australians with science, building our scientific capability and skills, producing new research, knowledge and technologies and improving and enriching Australians’ lives through science and research.”

Government leadership priorities include funding basic and applied research, building and maintaining critical scientific infrastructure and equipment and increasing collaboration, engagement and integration of the research sector and the wider economy.

“It appears that Minister Sinodinos’ approach is building on the work of his predecessor Greg Hunt MP who set a new, clear series of expectations for CSIRO which included the need to preserve and maintain public good research.”

“However it remains to be seen whether the positive talk will translate into clear commitments attached to credible funding and jobs. There is a lot of work to do to repair the damage done to CSIRO over recent years and kind words are not enough.

“The real test of the Turnbull Government’s revised commitment to CSIRO and publically funded research agencies will come on Tuesday 9 May when the Treasurer tables the federal budget papers,” Mr Popovski said.