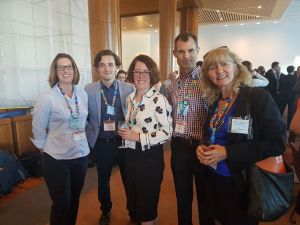 Science meets Parliament is an annual event – hosted by Science and Technology Australia – that seeks to close the gap between the Australian science community and Parliament. Across the two days there’s a full book of interesting events and inspiring speeches from people in science, industry and government.

On the first day there was a variety of voices speaking on the need to tailor and refine political messaging. A mix of journalists, political lobbyists, outreach professionals and scientists shared their viewpoints. An afternoon session of workshops focused on making pitches and successful parliamentary visits.

Australian Chief Scientist, Alan Finkel, addressed the conference comparing the productive relationship of science and government to a marriage. “Scientists need to represent themselves with integrity, engage with respectful and relevant communication, consider their discussions as a long hall effort and to communicate their issues with solutions,” Dr Finkel said.

The value of networking with others to communicate messages was a recurring theme; in his presentation CSIRO Chief Executive Larry Marshall observed that science operates as a collective.

“There is a need for the science and research sector to have a hand in future policy; to shape the national scientific agenda,” Dr Marshall said.

Melissa Skidmore, Staff Association Deputy President, attended as part of the CSIRO delegation to the event.

“It’s a good opportunity to meet with colleagues and a fantastic opportunity to network with a multitude of other scientists from all disciplines geologists, nuclear physicists… the list is endless, but the common factor is that all are truly passionate about their science,” Dr Skidmore said.

Hearing from the decision makers

The gala dinner provided an opportunity to rub shoulders and hear from some of the key players in the political scene. The opposition leader Bill Shorten highlighted the need for public funding to not be a fight to the death; announcing a Labor commitment of three percent of GDP for the science and technology sector.

Senator Michaelia Cash – the Minister for Jobs and Innovation – spoke on the connection between science and government in creating a prosperous and healthy Australia.

Minister Cash also highlighted under representation of women in Science, Technology, Engineering and Maths (STEM) and the ongoing support for the Superstars of STEM; a program run by Science and Technology Australia.

The challenge of supporting women in STEM was a theme of much of Science Meets Parliament. The Superstars of STEM Program began this year with thirty participants, focusing on building communication skills and a chance to use them. There was an announcement of expansion to sixty participants in the next year.

With parliament sitting there was a mix of changes and postponements on the day. Ultimately attendees were all given the opportunity to employ their new found skills to meet with a politician.

Mary Whitehouse, a delegate from Narrabri NSW, attended as part of the Staff Association team.

“I found Parliamentarians somewhat different to what I expected and the meeting insightful. Clearly the annual event of Science meets Parliament assists in keeping the old marriage of Science and Parliament vibrant,” Dr Whitehouse said.