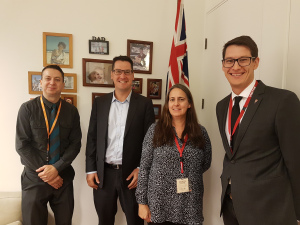 Minister Seselja has responsibility for CSIRO within the larger Jobs and Innovation portfolio led by Senator Michaelia Cash.

First elected as a Liberal Senator for the ACT in 2013, Minister Seselja was previously a member of the ACT Legislative Assembly and served as Leader of the Opposition and Canberra Liberal Leader.

Staff Association Secretary said the first meeting with the new Minister was positive.

“Minister Seselja was generous with his time and listened attentively to the issues raised by Staff Association representatives.

“CSIRO is a unique organisation and plays a distinct role in supporting Australian industry, communities and environment.

“While the Staff Association supports the current Government’s Statement of Expectations for CSIRO, we have different ideas on how this can be achieved,” Mr Popovski said.

Falling through the cracks

“There are issues in a lot of CSIRO business units were there is a tendency to focus on larger, trendy projects, many times at the expense of successful smaller projects, including those with industry.

“We made it clear to the Assistant Minister that it is essential that CSIRO and the Government support all parts of the research and development process.

“A diverse range of research projects will help keeps our industries strong, our environment healthy and communities thriving.”

Mr Popovski said that the funding for CSIRO infrastructure improvements was also discussed.

“The 2014 Commission of Audit identified that CSIRO required a minimum of $170 million over the decade just to keep the current infrastructure up to code, let alone achieve improvements.

“CSIRO has indicated that proceeds from the sale of the Ginnanderra research station near Canberra will fund the infrastructure upgrades. As both Assistant Minister and an ACT representative, Senator Seselja assured us he would closely monitor the issue,” Mr Popovski said.