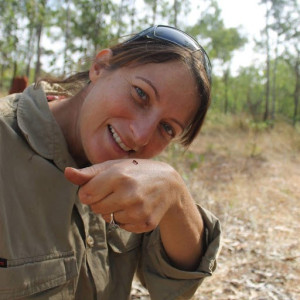 The Ruby Payne-Scott award – named after a CSIRO trailblazer who had her scientific career cut tragically short – is designed to support CSIRO women returning to the workplace following extended parental leave.

Jodie Hayward from CSIRO Darwin is one of the 2018 recipients. Jodie joined CSIRO Darwin’s Berrimah Laboratory in 2010 and works in research projects providing technical support to the Land and Water team performing invertebrate research. In 2017 Jodie spent close to ten months on maternity leave caring for a newborn son.

While on leave Jodie made an application for the Ruby Payne-Scott award outlining a development plan proposal to reconnect with her research work, skill development and professional networks.

“I was aware of the Ruby Payne-Scott Award because my colleague Anna Richards had been awarded the assistance coming back from maternity leave. But I’d always thought it was for scientists, I think CSIRO have changed it recently to broaden it out to other staff including technicians.

Jodie’s application included proposals to attend a geographic information system (GIS) training course, a two day tour of the Australian National Insect Collection (ANIC) and attendance at the Ecological Society of Australia conference in Brisbane to present a poster on DNA barcoding of ants in Australia’s monsoonal tropics.

“I was excited and overwhelmed when I received the news that the application was successful. For the last eight years I’ve been working at Darwin in the Ant lab and to get the opportunity to attend the training, conference and visit ANIC was great.”

“The distance of Darwin and the cost of travel means that opportunities to meet with colleagues face to face are extremely limited.”

The few women then working in CSIRO faced sexism and discrimination. Strict rules on deportment, dress and remuneration reflected the patriarchal mores of the day. Ongoing employment was subject to marriage restrictions as regulations forbade the permanent employment of married women in the Australian Public Service.

When CSIRO management discovered that Ruby had married, the revelation sparked an administrative battle with management as she fought to protect her permanent, ongoing research position. Ruby lost and was demoted to temporary employment status in 1950, lost her employer superannuation contributions and future pension rights.

A year later, following her second pregnancy (having miscarried several years earlier), Ruby resigned from the CSIRO. At the time, the concept of paid maternity leave was merely a dream. She was 39 years old and her scientific research career was at an end.

Nearly 70 years later, memories and legacies live on. CSIRO describes the Ruby Payne-Scott Award as “designed to support eligible staff who have taken extended leave of at least eighteen weeks… the award provides support to staff to re-establish themselves and reconnect with the research underway in their field and related fields of research, or advancements in their professional area.”

While Ruby’s treatment represented a massive injustice, the award that bears her name represents not only a sincere attempt at organisational atonement but a practical means of improving the lives and careers of CSIRO women now and into the future.

“I’m looking forward to the year ahead,” Jodie says. “My son is more settled and the training and development has really helped.”

“I think it’s fantastic and I wouldn’t have had these opportunities if it wasn’t for women like Ruby Payne-Scott.”