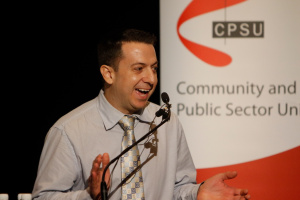 PREDICTING THE YEAR ahead in CSIRO is difficult at the best of times, but even more in 2019.

Much of the work we do is influenced by funding, from both government and industry. While funding and staffing levels have stabilised somewhat since the devastating cuts of 2014, workloads are excessive and the quest to secure additional funding is intense.

CSIRO has refocused its strategy. A greater integration of digital and data research has improved capabilities but failed to deliver the financial returns that are required for longer term sustainability.

Changes at CSIRO Executive and senior management levels continue to be numerous. There is little legacy and innate knowledge left from those that have navigated CSIRO through the fickle politics of Australian science in recent years.

And at the workplace level, where the wellbeing of Staff Association members is paramount, things are routinely being missed, not only on health and safety but with engagement and staff participation in decision making.

In terms of the work of Staff Association members in the future, much will depend on the outcome of the Federal Election, likely in May. As much as we would like the major parties to face off in a battle to elevate funding for science and technology, the more telling commitments that impact staff are likely to occur in industrial relations.

The Australian union movement’s Change the Rules campaign has demonstrated that our enterprise bargaining system is broken. Wages and living standards in the community are declining as fast as the returns from trickle-down economics.

In CSIRO we know that the last Enterprise Agreement process was designed to drive down real wages and conditions. Public sector austerity and neoconservatism have never been a good match with science and innovation.

As we start the year, the Staff Association will be seeking election commitments from the Coalition, Labor and the Greens. Members can get involved not only as voters but as participants in the Change The Rules campaign. Talk to your colleagues and friends about the importance of a strong and independent CSIRO, with the working conditions to go along with it.

The Staff Association Council is comprised of representatives from each State and Territory. The Council meets in-face once a year with this year’s meeting being held in Melbourne on 21 and 22 February.

The Council meeting will review our operational priorities and plan our key activities for 2019. In addition, we will look ahead to the next enterprise bargaining campaign. Even though our current Enterprise Agreement is not due to expire until November 2020, we will prepare and start engaging with members early.

We expect the CSIRO Board and Executive to bargain with the Staff Association and not be influenced like they have been by third parties like the Australian Public Service Commission. The outcome of the Federal Election will determine the type of bargaining policy we see from a newly elected Government and whether or not CSIRO will be required to apply it.

My wish for 2019 is that the work environment in CSIRO improves for each and every one of our members. It’s a simple goal, but it comes with complicated solutions. CSIRO isn’t doing enough to value its people, to make diversity and inclusion prosper or to make health and safety everyday business.

Ultimately it’s up to us, the members of the Staff Association, including those new members that join in 2019, to make it happen. Nothing that we have now in CSIRO was achieved without a battle between the union collective and the management of the organisation.

So if you have ideas, opinions and proposals, they are always welcome in the Staff Association. Get ready for a big year where we stand together to campaign for the changes we need to make CSIRO a better, fairer place to work.

Sam Popovski is Secretary of the CSIRO Staff Association.