Eliminating Racism: Or As We Call It, Harmony

Eliminating Racism: Or As We Call It, Harmony 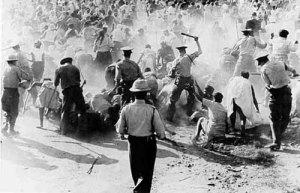 The International Day for the Elimination of Racial Discrimination –  21 March – was first observed in 1966 on the sixth anniversary of the Sharpeville massacre in South Africa.

In the immediate wake of another racist atrocity, we need to rethink ‘Harmony Day’ argues Osmond Chiu.

THURSDAY 21 MARCH is the International Day for the Elimination of Racial Discrimination.

You may not have heard of the day before. It is commemorated in Australia as Harmony Day.

Harmony Day was a creation of the Howard Government twenty years ago, a response to research conducted for the federal government about the causes of racism. It was a deliberate choice to not focus on ‘anti-racism’ but rather emphasise the importance and value of ‘harmony’.

Undoubtedly people feel an attachment to Harmony Day as a celebration of cultural diversity that schools, workplaces and community groups can participate in. It is a day that people have a positive association and feel very comfortable with.

But it does us no favours by avoiding any hard conversations about racism. As educator Robin DiAngelo has pointed out, niceness is not anti-racism. A parallel would be celebrating International Women’s Day without mentioning ongoing under-representation, sexism or the gender pay gap.

Polls have indicated strong community support by Australians for multiculturalism and non-discriminatory immigration policies, but there continues to be significant cognitive dissonance. The most recent Scanlon Foundation Mapping Social Cohesion Survey found that 25% of Australians have negative attitudes towards Muslims and that a broader definition of intolerance and rejection of cultural diversity can reach 30%-40% of the population.

While Australia fares better than most other Western countries, a self-congratulatory tone that we are the ‘most successful multicultural country in the world’ only breeds complacency and means we treat acts of racism and other symptoms of institutional and structural discrimination as the isolated actions of individuals. None of this happens in a vacuum.

Over the last few days, there has been public debate about the normalisation of far right rhetoric and hatred. Far right figures are treated as a novelty for television and given a platform, giving their points of view legitimacy in public debates and uncritically amplifying their message for a mass audience.

These acts are not benign and contribute to a climate where major party politicians feel comfortable dog-whistling.

We should condemn the mainstreaming of these abhorrent views, however, it cannot be at the expense of continuing to ignore other less overt forms of discrimination that have a direct impact.

According to the 2018 Leading for Change report, a fifth of Australians have non-European cultural backgrounds. We cannot pretend that the continuing under-representation of people of colour in the media, public sector, parliament and business is the result of of merit.

It has to be asked whether more representative institutions would meant a different treatment of past public debates about race, immigration and multiculturalism. Yet there is a defensiveness whenever these issues are raised, solutions such as targets and quotas being portrayed as worse than the problem itself.

The horrendous events in Christchurch last week should make us rethink how we currently recognise the International Day for the Elimination of Racial Discrimination. This year’s theme of mitigating and countering rising national populism and extreme supremacist ideologies makes the day feel even more relevant.

Rather than simply celebrating Harmony Day, the International Day for the Elimination of Racial Discrimination should be an opportunity to not just recognise our successes but also focus on what Australia still needs to do to combat racism and racial discrimination in all its forms.

Osmond Chiu is a Sydney-based writer, thinker and activist. He tweets at @redrabbleroz. This article was first published by Meanjin. More information on how to support Meanjin here.