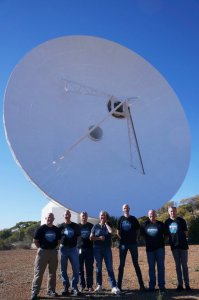 The fiftieth anniversary of the Moon landing by the United States – and the crucial role played by CSIRO in televising the epoch-making moment to a live, global audience – has captured the imagination of Australians around the country.

In December 2018 ESA announced that CSIRO – as host of Australia’s national research facilities and scientific research infrastructure – would provide operational support and maintenance for the New Norcia station; similar to the arrangements with the North American Space Agency (NASA) at the Canberra Deep Space Communication Complex (CDSCC) at Tidbinbilla.

Located 130 kilometres north of Perth, the town of New Norcia was established in 1847 originally as a monastery built as a part of a Catholic mission to the traditional owners of the land, the Yued people of the Noongar nation.

The mission became the home to members of the Stolen Generations who were forcibly removed to the so-called orphanages at New Norcia; which later operated as a boarding school up until the 1970’s.

The Royal Commission into Institutional Responses to Child Sexual Abuse identified the New Norcia schools as the site of multiple child abuse allegations.

Founded in 1975, the ESA consists of 22 member states and engages in a space flight program that includes participation in the International Space Program, solar system exploration missions through unmanned spacecraft, earth observation and science and telecommunications.

Officially opened in March 2003, the New Norcia site was the first deep space ground station constructed by the ESA, followed by facilities in Spain and Argentina which form part of the European Space Tracking (ESTRACK) network.

Following the ESA’s announcement last year, CSIRO officially took over day-to-day operational support and maintenance at the station in June 2019. The new partnership builds on treaties between Australia and ESA in place since 1979 to enable tracking of spacecraft.

The bushland setting overlooks a valley and the satellite sits on the highest point for many kilometres in each direction. Three forms of power are always maintained to ensure that the tracking station never loses contact with spacecraft.  A large solar array faces north, two large diesel tanks and motor are kept operational, and the current WA electricity grid is the default power setting.

A new 35-metre antenna is scheduled to be built by ESA over the next five years as part of the Space19+ program.  When completed, New Norcia will be the only deep space tracking station in the world to have large two dishes.

Launched in October 2018, the BepiColombo spacecraft is on route to Mercury. Due to arrive in 2025, the two spacecraft are expected to withstand temperatures in excess of 350 °Celsius. BepiColombo is a joint mission between ESA and JAXA.

The Mars Express and the Exomars Trace Gas Orbiter missions are focussed on the Red Planet. Launched in 2003, Mars Express remains in orbit collecting information via sensors and instruments on the geology and atmosphere of our terrestrial neighbour. The Exomars Trace Gas Orbiter was launched in 2016 and will sample the atmosphere and act as a data relay function for other components of the Exomars program including surface rovers and landers.

ESA’s Gaia spacecraft was launched in 2013 and operates as a space observatory. The mission’s aim is to make the largest three-dimensional catalogue of the Galaxy by measuring approximately 1 billion astronomical objects – including stars, planets, comets, asteroids and quasars – before the projected end of operation in 2022.