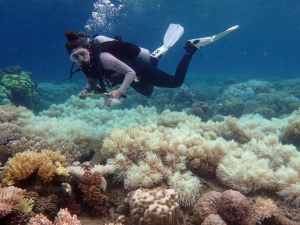 Nobody argues that science is perfect, but it has been an essential part of making us what we are, argues former Australian Chief Scientist Ian Chubb.

There will always be people who call for additional review or scrutiny of science when the results of a rigorous process don’t yield the outcomes they want.

History shows how effective the strategy has been. It also shows why the notion of the precautionary principle is so important. The principle requires that precautionary measures should be taken if the risk or threats of harm to (say) the environment are significant. It can mean taking action in the face of uncertainty.

But when the available evidence is developed through a rigorous scientific process (and especially when it draws on multiple lines of evidence), suitable precautionary actions can be introduced with confidence.

To arrive at the most recent scientific consensus statement, some 1,600 relevant peer-reviewed papers and reports, published over the past few decades, were identified. Each had been circulating and available to the scientific community and other interested readers for more than 30 years.

They were produced by some hundreds of authors from diverse institutions in Australia and overseas. They had been published in multiple outlets. They were subject to the usual intense scrutiny that follows publication.

The point of the consensus statement was to determine whether there was evidence converging on any particular point. The papers and reports were therefore picked apart and the results analysed by about 50 authors with internationally recognised expertise in Great Barrier Reef and coastal science, particularly water quality science and management.

For three of the chapters in particular, the authors drew on additional experts; and all chapters were seen by external reviewers. The whole process was carried out under the watchful scrutiny of the Reef Water Quality Independent Science Panel.

The final output is a multidisciplinary analysis and covers the condition of coastal and marine ecosystems, sources of pollutants, risk, catchment scale management priorities, governance, monitoring and modelling aspects, and gaps in knowledge to be addressed.

And there was a convergence. There is a consensus:

Key Great Barrier Reef ecosystems continue to be in poor condition. This is largely due to the collective impact of land run-off associated with past and ongoing catchment development, coastal development activities, extreme weather events and climate change impacts such as the 2016 and 2017 coral bleaching events.

Current initiatives will not meet the water quality targets. To accelerate the change in on-ground management, improvements to governance, program design, delivery and evaluation systems are urgently needed. This will require greater incorporation of social and economic factors, better targeting and prioritisation, exploration of alternative management options and increased support and resources.

Two recently published reports add further weight to the evidence: The Reef 2050 Water Quality Improvement Plan Report Card 2017 and 2018 and the Outlook Report produced by the Great Barrier Reef Marine Park Authority both point in the same direction – the reef ecosystem overall is deteriorating. There are encouraging patches showing signs of regeneration; and some of the Great Barrier Reef is in excellent condition.

The challenge is to use the evidence to develop policy that will sustain the best parts of the Great Barrier Reef while giving any “green shoots” a chance to survive, even in the face of global warming.

The balance of evidence is important. The scientific consensus statement (2017) involves the work of some hundreds of independent scientists. There is a small handful of scientists who have argued that the overwhelming majority are wrong, notwithstanding that the most prominent concedes that he is “not the authority on the issue”.

If there is evidence that leads to an alternative conclusion, it should be put into the public domain and be subjected to the same scrutiny as the work critiqued in the consensus statement. There has been plenty of time for the work to be done. This is no time for hunches; it is time for evidence.

When scientists seek to understand the world they make predictions and then test them. And they publish their results through appropriate channels.

Nobody argues that science is perfect. Mistakes can be made and sometimes are. The evidence provided by science at any point in time, however, is the accumulated knowledge that survives after rigorous challenge, scrutiny and testing.

We can be confident that decisions made on the basis of evidence derived from the processes of science will continue to provide benefits across society. It has done so for decades notwithstanding well documented diversionary tactics.

As a nation, science has been an essential part of making us what we are. There is no reason to stop now.