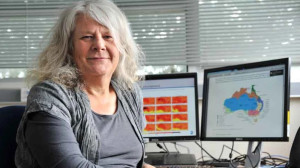 As a world acclaimed climatologist; Dr Whetton made a massive contribution to CSIRO’s atmospheric research effort for more than two decades.

The news of her sudden and apparently peaceful death was announced by her partner Janet Rice, Australian Greens Senator for Victoria.

“Penny was such a special person, it’s hard to comprehend the news of her death.

“On behalf of CSIRO Staff Association members, I want to convey our sincere condolences to Janet and the rest of the family during this time of bereavement.”

An honours and PhD graduate from the University of Melbourne, Dr Whetton joined CSIRO in 1989 in the Atmospheric Research division (later to become the Oceans and Atmosphere business unit) working from the Aspendale laboratory.

Dr Whetton was one of the lead authors of the Fourth Assessment Report of the Intergovernmental Panel on Climate Change in 2007 and her CSIRO career included time as a research leader and a research program leader.

A staunch Staff Association member throughout her career, Dr Whetton leant high profile support to the union’s campaign to support CSIRO in 2016; a year following her exit from the organisation.

“Both Penny and Janet were there for CSIRO and Staff Association members when it mattered the most,” Mr Popovski said. “No-one can forget that.”

Janet and Penny had a lifelong partnership; the couple met at university during the early 1980’s and were married for more than thirty years. Their journey together through Penny’s gender affirmation was an inspiration for many trans and gender diverse people.

This page will be updated with tribute arrangements and service details as they become known.

A memorial fund has been established to fund vegetation and erosion control work at Sisters Beach in Tasmania – Penny and Janet’s special place. This fund has now closed.

The University of Melbourne has also set up a fund honouring Penny as an ‘outstanding leader as a climate scientist and a great advocate for and communicator about the need for powerful action on climate change.’

Donations will ‘directly support our students and will contribute to finding solutions to global challenges in climate science and communication and action needed to address our climate change crisis.’