Anatomy of a defeat

Anatomy of a defeat 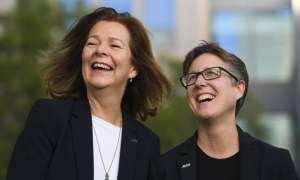 The Coalition thought they had it in the bag, but a last-minute manoeuvre from Pauline Hanson left them in shock; Paul Karp describes how a thaw between unions and One Nation doomed the ‘ensuring integrity’, anti-union legislation.

IT WAS ONLY A MATTER OF WEEKS after the Morrison government secured its shock election victory that it got down to work on reintroducing its union-busting bill.

On 4 July the Coalition reintroduced the Ensuring Integrity legislation and by August employer groups had the distinct impression from One Nation senator Malcolm Roberts – who normally takes the lead on industrial relations issues – that his party was solidly behind it.

With One Nation’s two votes seemingly in the bag, along with those of Cory Bernardi, the government only needed independent Jacqui Lambie or Centre Alliance’s two votes to give it the victory which would see new powers to deregister unions and disqualify their officials.

Either or both seemed viable – Lambie suggested the bill would pass if militant construction unionist John Setka did not quit and Centre Alliance began to pursue amendments.

But behind the scenes something was happening.

A lengthy three-month Senate committee process bought the Australian Council of Trade Unions time to fight a rearguard action against the bill, which culminated in a stunning victory on Thursday when Lambie, Roberts and One Nation leader Pauline Hanson voted against the bill.

In her Senate contribution on Wednesday Hanson credited her interest in the bill to an “early dialogue with the unions … initiated by central Queensland union member Chris Brodsky”, which led to “worthwhile discussions” with 10 union bodies in total.

Brodsky, a Queensland official from the mining and energy branch of the Construction Forestry Mining Maritime and Energy Union, tells Guardian Australia he first met Hanson in late August or early September in Rockhampton and put her in touch with state secretary Michael Ravbar, among others.

Brodsky – who continued to call Hanson’s office in the months leading up to the vote – says he was as surprised as everybody else when the party voted the bill down.

He insists Hanson was genuinely persuaded after “taking the time to understand what the bill would do to unions”, adding that the accusation Westpac had breached anti-money laundering provisions 23m times “wouldn’t have helped”.

“It was high on the agenda in the community and public opinion that there wasn’t an even playing field,” he says.

“People don’t want multi-millionaires breaking the law and nothing happens. If they’re ensuring integrity for unions – it needs to be in place for companies as well.”

With Hanson engaged on the issue, One Nation started to have substantive discussions with the unions about ways the bill overreached.

Although Labor under Bill Shorten was strident in its opposition to everything One Nation stood for, the Australian Council of Trade Unions under Sally McManus never lost touch with the minor party. Anthony Albanese is also open-minded, and while many Labor MPs and senators are still not on speaking terms with them, others have built bridges with Hanson.

By mid-October, Hanson was throwing her weight around on the dairy code of conduct threatening to block other bills and winning Labor support. While the Coalition caved on that issue, union leaders saw an opportunity in the rocky relationship between the government and One Nation.

The attorney general Christian Porter was in the market for a deal so when the Senate committee delivered a report detailing Centre Alliance demands for a new demerit point system to lift the threshold for disqualification, he agreed.

On 20 November Porter told the National Press Club he was “looking forward” to Lambie’s support because although Setka had been ejected from Labor he had refused to quit the union movement.

In retrospect employer groups see this as a fatal misstep, assuming Lambie would fall into line. Lambie reports the government “wouldn’t even talk to me” about her proposed amendments to the bill – which would have exempted industrial action from the list of conduct that can trigger deregistration.

On 29 November Hanson set a high price for One Nation support, but Porter agreed to both Centre Alliance and One Nation amendments, setting up the path to pass the bill in the penultimate sitting week of the year.

Publicly, Hanson twice took to Sky News to warn the government not to rush the bill and it could not take her support for granted. But privately, the government was reassured that they had a deal and between Centre Alliance and One Nation there would be no need for Lambie’s vote.

The ACTU brought a large contingent of unionists from its many non-construction affiliates to Canberra, seeking to hammer home the point that the bill was bigger than Setka and the CFMMEU, that unions were at risk of deregistration for campaigns such as advocating nurse-to-patient ratios or fighting asbestos company James Hardie.

In the dying days, they flooded the crossbench with 45,000 emails from workers urging the bill be blocked.

While Centre Alliance stopped taking meetings with the unions when they started running ads against them, One Nation never did. Both minor parties supported an hours motion to ensure everyone could have their say on the bill with a final vote on Thursday.

Roberts and Hanson’s Senate contributions were cryptic. While Roberts warned against union-bashing, he also blasted “rogue” union officials and said “it’s time for improved accountability and for integrity”.

Hanson said it was “ironic” parliament was debating ensuring the integrity of unions but not multinational companies, suggesting there was “one rule for white collar crimes and a much harsher [rule]” for blue-collar crimes. But she also stressed the improvements One Nation had made to the bill, and appeared to blame unions for complex awards.

When the bells began ringing at 4.30pm on Thursday, everything was still going to plan for the government with One Nation and Centre Alliance amendments voted up, and Greens and Lambie amendments going down, with the exception of a review of the bill.

But when it came to the crucial final vote, Hanson and Roberts crossed the floor to vote with Labor, the Greens and Lambie, helping defeat the bill in a 34-all tie.

Government leader in the Senate Mathias Cormann looked down at his phone as the bells rang out, while social services minister Anne Ruston was similarly stunned. “Thanks Malcolm [Roberts]!” exclaimed one bitter Coalition senator after the result was declared.

Labor senator Catryna Bilyk shepherded Hanson back to her office, shocked but grateful. Hanson explained to her that One Nation had voted on merit.

At a jubilant press conference, ACTU president Michele O’Neil warned the government would be “humiliated” if it brought the bill back.

Labor’s leader in the Senate, Penny Wong, said it was clear the government had spent “more time defending Angus Taylor than convincing the crossbench”.

Both the ACTU and One Nation ruled out any form of quid pro quo, with Hanson insisting she would “never base [her] vote on that”.

But since Setka himself has warned of “consequences” for those who voted for the bill, every crossbench senator knows the union movement will campaign fiercely against supporters of the bill. There is now an expectation of union forbearance towards One Nation at the Queensland state election, due in October 2020, although not positive support.

On Friday Porter stopped short of accusing Hanson of breaking a promise to the government but said it was “exceedingly strange” they had rejected the bill, adding that he had made an “error of judgment” in assuming the negotiations were conducted in good faith. He bluntly rejected all of the purported reasons offered by Hanson for the party’s backdown.

“We accepted everything that Pauline had asked for in the process,” Porter said. The issue of administrators taking over unions “was never raised” in weeks of negotiations.

Now the question is whether One Nation will stick to its guns. Hanson said the issue should be a “shot across the bow” of unions and if the bill is reintroduced she will “assess it at the time” and her vote is “not guaranteed the next time”.

Because of those comments, some say this week’s decision is merely a stay of execution.

But Brodsky seems confident. “Personally, I think they’ll stick to their guns on this one,” he says. “I congratulated Pauline [after the vote] on behalf of all union members who are now protected.

“She still has reservations about unions but I think she recognises the majority do a good job the majority of the time.”

“They’re coming to realise that the word ‘union’ isn’t that bad.”