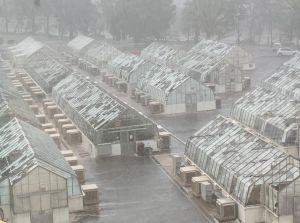 An intense hailstorm – which rained down on Canberra a shower of ice the size of golf balls – has caused significant damage to CSIRO’s Black Mountain laboratory.

CSIRO reported damage to nearly all 65 glasshouses located at Black Mountain, home to a significant proportion of the organisation’s agricultural experimental research. CSIRO also reported additional damage to vehicles, buildings and solar panels across the site.

“The hailstorm in Canberra has come at a time when CSIRO’s research capabilities are fully extended, including in assisting our nation in response to the bushfire crisis,” Staff Association Sam Popovski said.

“That’s why the Staff Association has written to Science Minister Karen Andrews concerning the damage caused to CSIRO infrastructure and experimentation in Canberra and requesting urgent consideration of extraordinary financial support from the Federal Government.”

The hailstorm swept through Canberra on Monday 20 January and caused widespread destruction to buildings and automobiles with the event declared a catastrophe and likely to result in a damage bill worth several million dollars.

Most of the 65 glasshouses located at Black Mountain were severely damaged by hailstones, resulting in the destruction of plant experiments, largely agricultural research. No CSIRO staff or visitors to the Black Mountain site were injured in the storm or in its aftermath.

“The experiments were largely focused on environmental research, how to reduce the amount of water, chemical and fertiliser use… for projects that potentially might have been close to the end of say two or three years work, that is really distressing,” CSIRO Chief Operating Officer Julie Zielke said.

ABC reported that the vast majority of the work being conducted at the CSIRO was aimed at improving crop sustainability and researchers had been growing wheat, barley, legumes and cotton in the damaged glasshouses.

While confident CSIRO would arrange repairs to infrastructure, Mr Popovski said that the impact of the lost research was just as significant as the physical damage.

“The scientific research that has been lost also has an immense value, that is not covered by building insurance; and is not a contingency in CSIRO’s operating expenditure in the current and future financial years,” Mr Popovski said in correspondence to Science Minister Andrews.

“The CSIRO Staff Association requests your urgent consideration of extraordinary financial support to enable experimentation in Canberra to recommence as quickly as possible following the damage caused.

“This support would enable CSIRO to continue work with important clients and collaborators as soon as possible and avoid cuts to other science and research in order to pay for the experimental damage,” Mr Popovski said.

The Staff Association has requested a meeting with relevant CSIRO Executives within the next fortnight to discuss the impacts of the damage on staff and our science and research, including plans for rectification.