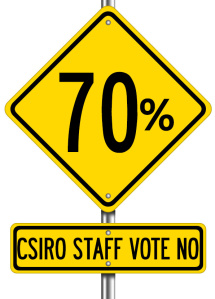 Staff at the Commonwealth Scientific and Industrial Research Organisation (CSIRO) have rejected a management proposal to cut workplace conditions and rights and in the process dealt a blow to the Federal Government’s failed public sector bargaining policy.

Turn out was high with more than three-quarters (76 per cent) of eligible workers participating. Of those that voted, 70 per cent of CSIRO staff rejected the CSIRO Executive’s proposed enterprise agreement that sought to strip legal protections and workplace rights.

The result follows years of heavy cuts to jobs and research and increases the pressure on the CSIRO Executive and Board to challenge the Turnbull Government’s outdated approach to workplace relations.

Opportunity to act is now

CSIRO Staff Association Secretary Sam Popovski called on the CSIRO Executive to accept the result of the ballot and change tack immediately.

“This strong result sends a clear message that CSIRO staff will not accept cuts to workplace conditions and rights. It’s now up to the CSIRO Executive and Board to genuinely listen to the views of staff, drop this regressive bargaining policy, get a fair deal done.”

“The Staff Association calls on the CSIRO Executive to seize this opportunity and urge the Government to change the bargaining policy which remains the major obstacle to rebuilding trust across the organisation,” Mr Popovski said.

A recent all staff survey displays a picture of a divided CSIRO; beset by low morale and a massive gulf between the views of the Executive Team and the wider workforce. Senior leaders at CSIRO have also been criticised by an Ernst and Young report which exposed major failings during a controversial restructure that targeted public good research.

“This ballot result is no surprise given the damage the Turnbull Government has inflicted on CSIRO workers through its unworkable Commonwealth bargaining policy.”

“CSIRO staff won’t get the fair enterprise agreement they deserve until the Turnbull Government makes sensible changes to its bargaining policy so agencies are free to resolve this dispute which has run for well over 1000 days.”

“The fact that ABC staff, who were not subject to the failed Commonwealth bargaining policy, were able to secure a new agreement that includes domestic violence leave and extra parental leave, shows how cruel and flawed the Governments approach is,” Ms Flood said.