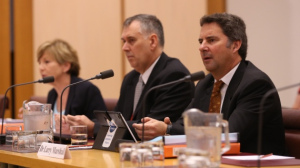 Media reports and Senate Estimates testimony has examined the issue of executive pay at CSIRO, revealing details of generous salaries and performance bonuses, including the remuneration of Chief Executive Dr Larry Marshall.

The scrutiny comes as the larger CSIRO workforce approaches the third year of an effective pay freeze due to the Executive Team’s support for the Federal Government’s controversial public sector bargaining policy.

Executive earnings on the increase?

A report from The Australian claimed that CSIRO Executive remuneration was on the march, while the pay of general staff remains at a standstill.

“Executive earnings at CSIRO have risen 30 per cent over three years, at the same time staff salaries were frozen and more than one in five workers lost their jobs.

“Figures from the science agency’s latest annual report show the austerity demanded of staff has not extended to management, with average executive packages rising $90,000 a year to more than $390,000.”

CSIRO spokesperson Mr Huw Morgan denied the claim, pointing out that the executive management team had reduced from 33 to 20 roles over the period in question.

However “over time there have been role-based, market-based remuneration adjustments for a limited number of executive management as their roles have changed as is the case for all staff,” Mr Morgan said in a statement.

The Staff Association queried CSIRO Executive salaries last November, noting that while senior management personnel fell from 22 to 20 positions over the past financial year; total expenditure on salaries increased from $5.023 to $5.568 million over the same period.

Executive pay was also on the agenda at Senate Estimates, with Labor Senator Kim Carr grilling Dr Marshall on the details of his remuneration.

Department of Industry, Innovation and Science Secretary Glenys Beauchamp confirmed that Dr Marshall’s base salary was $673,712. However Dr Marshall is eligible for a 30 per cent performance bonus of this amount on an annual basis.

Somewhat surprisingly – in a year that featured controversial cuts to CSIRO jobs and research, embarrassing gaffes and a damning Ernst and Young report on the performance of the Executive Team – Dr Marshall claimed he “got roughly 85 per cent of that 30 per cent.”

CSIRO Deputy Chief Executive Craig Roy testified that “if Dr Marshall were to receive 100 per cent of his 30 per cent then a total maximum reward would be $875,000.”

According to Fairfax Media “CSIRO spokesman Huw Morgan would not confirm details of Dr Marshall’s salary but said that this figure reflected evidence presented during estimates.”

Executive bonuses for all

Under further questioning from Senator Carr, Dr Marshall revealed that every single one of the twenty CSIRO senior executives received a performance bonus in 2015-16.

“All of the executives have received a portion of the at-risk component of their salary; none of them have received all of it,” Dr Marshall responded.

Dr Marshall indicated that the organisation would in future revert to more transparent reporting standards and publish executive salary bands and eligibility for performance payments.

“It has definitely had an impact on the morale of staff,” admitted Mr Roy.

“Staff are talking about it more. But the message I would like to leave you and staff with is we are back around the negotiating table now. There have been extensive negotiations over the last fortnight. We believe we are making ground and we have the best interests of staff at heart.

“We believe they deserve a pay rise and they will get one as soon as we can get agreement with the unions. It takes two people to negotiate and we are both doing that, in good spirit, at the moment,” Mr Roy said.