Strong support for staff representative on CSIRO board

Strong support for staff representative on CSIRO board 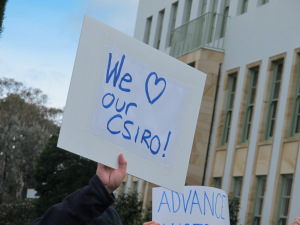 A recent survey has revealed strong support from CSIRO staff for a representative voice on the organisation’s board.

The staff poll also revealed that workplace morale and confidence at CSIRO has stabilised and appears to be slowly rebuilding.

However more than half of respondents revealed dissatisfaction at the current balance between public good research and commercialisation activities at CSIRO.

Hundreds of staff participated in the survey in a bid to send a message to CSIRO Chief Executive Larry Marshall ahead of the meeting.

Staff want a voice on CSIRO Board

The strongest result of the survey involved overwhelming support for a staff representative voice on the CSIRO Board, similar to arrangements that exist at the ABC. “More than 82 per cent of participants agree or strongly agree that staff should have a direct say on the CSIRO board. That’s a strong starting point for a wider discussion within CSIRO and with policymakers exploring the option of a staff-elected director.”

Nearly a third of staff (32 per cent) who participated in the survey reported feeling more confident about the future of CSIRO as compared to twelve months ago. However, when asked about ongoing career prospects at CSIRO, the number of respondents that felt more confident compared to a year ago fell to 25 per cent. “There are signs that the low levels of CSIRO morale have started to rebuild after damage inflicted by the heavy job cuts of 2014-15 in particular,” Mr Popovski said.

“The results are a modest endorsement of Strategy 2020 in terms of confidence in the organisation’s future but demonstrate a gap when it comes to the career path of CSIRO staff.”

Mr Popovski cautioned that there appeared to be a perception among staff that public good research at CSIRO was being crowded out by commercialisation activities.

“Nearly 65 per cent of respondents reported a level of dissatisfaction with the balance and expressed the view that there should be more public good research at CSIRO.” Meanwhile a significant minority – 44 per cent – of respondents said they were not satisfied that the Executive or the Board were effective in influencing the Federal Government to benefit CSIRO. “The responses indicate there’s more work to be done in reassuring staff that CSIRO’s senior leadership are making the case for our science at the federal level,” Mr Popovski said.