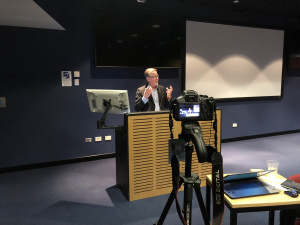 The debate over staff representation on the CSIRO Board – similar to arrangements at the Australian Broadcasting Corporation – continues to build with extensive discussions planned in the new year ahead of the federal election.

Quentin Dempster – former ABC journalist and board member – addressed CSIRO Staff Association members across the country recently about workplace democracy and the role of a staff-elected director.

“It’s clear that increasing the representative voice of CSIRO staff within the organisation’s senior governance structure is broadly popular.”

A voice at the top 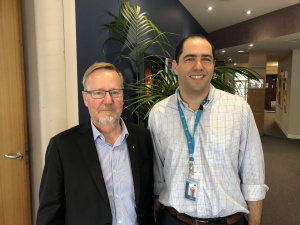 Mr Dempster – who served as an ABC staff-elected director during his lengthy journalistic career at the national broadcaster – visited the Marsfield laboratory to speak to staff in an address broadcast to more than 25 CSIRO worksites around Australia.

“The staff-elected director at the ABC was integral to the public perception of the independence of the organisation, independence in media and independence from government,” Mr Dempster said.

“These organisations are creatures of (legislative) acts of the federal parliament and the duties of directors are clearly set out there under the Act to protect the independence and integrity of the organisation.” Mr Dempster said that the original concept of the ABC staff elected director – a brainchild of the Whitlam Government – had changed over time.

“The role has evolved to become a dynamic contributor through its role as a conduit from the Board to a major stakeholder which is the staff. So, you’re not there as the shop steward.”

“It’s about building cohesion through a staff-elected director who’s actually in the room and able to competently raise with fellow directors the concerns that would be had by staff about the success of the entity,” he said. The qualities of a staff-elected director speak to the demands of the role, Mr Dempster said.

“You need high levels of expertise, analytical skills, communication skills, being able to read board papers and bring your experience, all your intellectual honesty and experience to bear.

“So, you need somebody obviously of integrity but also political smarts as well; to be able to argue a case within the confidentiality of the boardroom.”

Mr Popovski said that the Staff Association would begin to develop the concept of a CSIRO staff-elected director over coming months.

“While there’s broad support in the workplace for a staff representative voice on the CSIRO Board, what that looks like and how it might be achieved merit closer examination.”

“We plan to raise the issue for discussion at next week’s Consultative Council meeting with the Executive with a view to elevating the debate about a staff-elected director on the CSIRO Board in the new year.

“As the federal election draws closer the Staff Association will begin formal discussions with policymakers and politicians around a range of issues concerning CSIRO and board representation is set to feature,” Mr Popovski said.