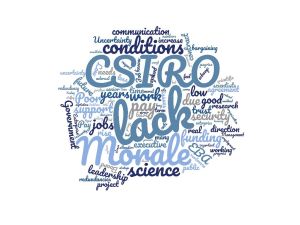 More than two and a half years beyond the nominal expiry of the current enterprise agreement, the Executive Team’s failure to prioritise the working conditions and rights of staff is needlessly compounding the plethora of challenges of working in today’s CSIRO.

“The results make for sobering reading.”

Nearly 80 per cent of respondents stated that the CSIRO Executive and Board had failed to protect the independence of the organisation.

Calls for an independent, external review into Executive management have gathered pace, with more than 80 per cent of participants supporting an inquiry.

The Turnbull Government has work to do, with 75 percent of respondents indicating that more work must be done to demonstrate a real commitment to Australian science. An incredible 95 percent of participants reported that the resolution of enterprise bargaining was ‘essential’ to improving workforce morale. 77 percent of respondents do not trust Executive to maintain any working conditions or rights removed from the enterprise agreement into CSIRO policy.

Staff feel that there is only one way this can be achieved. Almost 96 per cent of responses agreed that current working conditions needed to be retained or improved for CSIRO to be an employer of choice. Three days of negotiations between Staff Association representatives and CSIRO Executive are taking place in Canberra from 22-24 February. A full report will be available to Staff Association members following the meeting.