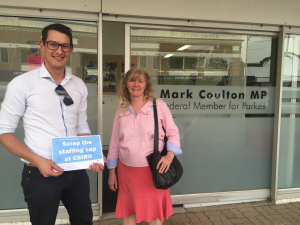 The campaign against the implementation of the Government’s staffing cap at CSIRO has reached the office of Science Minister Karen Andrews and other senior members of the Government while pressure continues to build on  Chief Executive Larry Marshall.

Delegations led by Staff Association workplace representatives have targeted senior members of the Government to deliver a message about the impact of the Average Staffing Level (ASL) cap at both the local and national level.

Getting the message to the Government

“Our message to Science Minister Karen Andrews couldn’t be clearer. CSIRO staff urgently call on the Federal Government to scrap the application of the ASL cap at CSIRO,” Mr Popovski said. “The outcomes of the application of the staffing cap have already been dramatic,” Mr Popovski said.

“170 new positions have been placed on hold, many with little prospect of proceeding and most term and casual positions – totalling nearly 1,500 – are currently being reviewed,” he said.

Narrabri Delegate Mary Whitehouse – supported by Staff Association Councillor Mike Collins – made the trip to highlight the impact of the cap on local research; specifically relating to the Australian Cotton Research Institute (ACRI) at Myall Vale. “ACRI is a prime example of how the staffing cap restrictions are damaging research, external contracts and relationships with the cotton industry. We are vehemently opposed to the outsourcing of work to expensive and inefficient contractors and labour hire which threatens CSIRO’s operations and future credibility,” Mr Popovski said.

Minister Coulton met with the Staff Association delegation and made a commitment to seek more information from Minister Andrews office on the impact of the CSIRO staffing cap at Myall Vale.

Senior officials from the Staff Association met with Chief Executive Larry Marshall and members of the CSIRO Leadership Team to interrogate the organisation’s response to the restrictions imposed by the staffing cap.

“It’s clear that Dr Marshall and the CSIRO Board have not taken action to stop this fundamental threat to CSIRO’s mission to deliver for industry and the Australian community,” Mr Popovski said.

“Staff have told us that senior management appear all too relaxed about turning to outside contractors and labour hire despite the extra expense and corrosive effect on CSIRO job security.”

“The Staff Association will not back down and will continue to escalate our campaign to more Government MPs and politicians in coming weeks,” Mr Popovksi said.