Staff Association Secretary Sam Popovski reflects on a busy year for CSIRO that featured growing community concern at the state of the climate, science integrity headaches, a federal election, increased pressure from staffing cap restrictions and a battle to make it to the bargaining table.

IT’S ALMOST THAT TIME OF YEAR when our thoughts turn to spending time over the holidays relaxing in the company of family and friends. However, it’s worth spending a few moments to reflect on the achievements of Staff Association members and delegates throughout 2019, in the context of increasingly challenging circumstances.

Ten days prior to the new year, CSIRO and the Bureau of Meteorology published the second edition of the biennial State of the Climate report. “In particular, climate change is being felt through an increase in the frequency and severity of high-impact weather events such as heatwaves, extreme fire weather conditions, coastal inundation and marine heatwaves. These trends are projected to continue,” the authors warned. 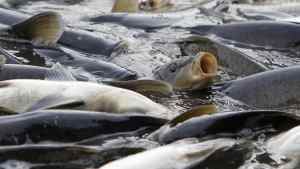 The impact of climate change, drought and poor water management all combined to deliver the shocking images of many thousands of dead and dying fish in the Darling River near Menindee in western New South Wales. CSIRO was dragged into the resulting furore with the report from the Murray-Darling Basin Royal Commission criticising the organisation for its lack of cooperation. The Commission’s findings revealed the pressure brought to bear on CSIRO scientific integrity from political and commercial interests; a theme that would repeat in coming months as the Federal Election approached.

Joining hundreds of thousands of union members around the country, CSIRO staff participated in a national series of Change the Rules rallies in early April, calling on reforms to Australia’s workplace laws. With the election drawing ever near, the Staff Association wrote to representatives of the Coalition, Labor and the Greens seeking responses to a list of priority issues of for CSIRO staff. 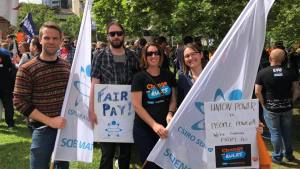 CSIRO moved to clarify the roles of area custodians, merge misconduct and grievance procedures and released the results of the inaugural wellbeing survey. While the results confirmed that staff remain strongly committed to CSIRO, the report highlighted serious issues around levels of respect, staff anxiety and fears for freedom of expression.

Science integrity was back in the spotlight with concerns raised about the Department of Environment’s approval of the Adani coalmine project; a process that CSIRO made a significant contribution to with the assessment of the proponent’s groundwater plans.

While research failed to feature as a major policy issue during the election campaign, both the Staff Association and peak body Science and Technology Australia made the case for the election of a Government that would use support of science and invest in Australia’s future. The 18 May election result – a surprise victory for the Liberal National Coalition in defiance of the polls – signalled a renewed test of resilience for CSIRO staff.

The re-election of the Coalition Government only intensified questions on the future of climate action, with some dire predictions making headlines in June. While the Morrison Government decided to retain Science Minister Karen Andrews within the cabinet, Labor changed its team in the shadow portfolio by replacing long-standing science and CSIRO advocate Kim Carr.

At CSIRO, the intensified application of the Government’s staffing cap restrictions became more apparent and Staff Association representatives started to gather more information the impact of the cap on jobs and research. Union representatives also started preparations for the next round of enterprise bargaining.

In August, CSIRO took up operational responsibility for the New Norcia tracking station. Media reports revealed that Adani sought the names of CSIRO scientists involved in the assessment of the groundwater plan and a ruling by the High Court of Australia reignited the freedom of speech debate across the federal public sector. CSIRO’s all staff survey revealed largely positive results however the tightening of ASL cap restrictions loomed as a new drag on workplace morale. Growing concern of an increase in outsourcing and use of labour-hire at CSIRO in response to the staffing cap formed the basis on a Staff Association submission into a Senate inquiry into service delivery.

Early preparations for enterprise bargaining continued. CSIRO Staff Association supported September’s School Strike for Climate which – as part of a global movement of protest by young people – called on world leaders to listen to the science and take meaningful action on climate change. Media reports highlighted the continuing impact of the ASL restrictions and the Staff Association campaign to scrap the staffing cap at CSIRO reached all the way to Minister Andrews’ office. We welcomed the appointment of Melissa Donnelly as CPSU National Secretary. The Staff Association and CSIRO were deeply saddened by the unexpected death of former climate scientist and union stalwart Dr Penny Whetton.

October proved a crucial month for both enterprise bargaining and the ASL cap. After engaging in preliminary bargaining discussions with the Staff Association, the CSIRO Executive made the shock move of announcing a snap staff survey to gauge support for a ‘determination’ on staff pay and conditions in lieu of negotiations for a new enterprise agreement. 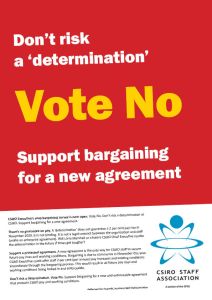 Ironically, the ‘determination’ mechanism proposed – using powers granted to the Chief Executive under a section of the Science and Industry Research (CSIRO) Act – was the same that Staff Association representatives had long argued should be utilised to escape Government bargaining policy and ASL cap restrictions; to no avail. However, the ‘determination’ option failed to gain majority support from staff and CSIRO Executive subsequently announced their intention to move ahead with enterprise agreement negotiations.

Meanwhile, CSIRO faced an ASL showdown in Senate Estimate. At an earlier, separate hearing Finance Minister Mathias Cormann outlined the process for CSIRO to seek a staffing cap exemption and practically encouraged the organisation to apply for an exemption. Yet when later pressed on the issue, CSIRO Executives admitted that they had failed to make an application to the Federal Government for ASL cap relief.

Pressure on CSIRO Executive to act on the staffing cap continued to grow with a dispute lodged by the Staff Association heard before the Fair Work Commission. Chief Executive Larry Marshall found he had some explaining to do after referring to CSIRO Postdocs as “interns” and “kids” in remarks at Senate Estimates.

While our challenges remain, Staff Association members should be proud of the progress we’ve achieved together. Enterprise Agreement negotiations have made early progress and the issues that matter to staff are well and truly on the table. Our campaign against the ASL cap restrictions has caught the attention of media and politicians and it’s forcing CSIRO Executive to act and seek relief from the Federal Government.

My thanks to all our members on behalf of the Staff Association team. I’d like to especially thank our delegates and councillors, who volunteer their time to take a leadership role in the union and ensure the views of CSIRO workplaces around the country are represented.

Best wishes for a safe and restful holiday season. I look forward to working with you all again in the new year.

Sam Popovski is the Secretary of the CSIRO Staff Association.